The season has got off to a good start, with some tough fixtures and the return of a GB player to play in the Old Boys’ game.

Fixtures started against Yarm, where the U16 won 6-1, some great goals being scored by individual players. In particular, a one-handed reverse stick goal from Goerge Fisher and Jack Stoves scoring a flick. The U14 had a tough game against a good team, who played some excellent “team” hockey and lost 6-0. Man of the match was Ewan Whittaker. The U13’s then travelled to Yarm to play two 7 a side games. They had a slightly weakened team due to a clash of fixtures. George Henshaw volunteered to GK for the ‘B’ team. A slow start by both teams meant both teams losing at half time. A good team talk at half time turned this around with the ‘A’ team coming back to within one goal, before losing 4-2. The ‘B’ team restricted the second half to only 4 goals, with some great saves from George and defending from Dean Khan. Men of the match went to Jack Walton and Dean Khan. The U15’s need some new players this year as some students have left school or retired from Hockey. Thanks to Jack and Noah who helped out, but, unfortunately, they still lost 6-0 to a strong physical Yarm team. The man of the match was Anthony Thurlow.

The girls had their first fixture at Queen Ethelburga’s, a school well known for its unbelievably good sports facilities. The girls were amazed when the astro was watered before they played. The girls really enjoyed the tough games, with the ‘A’ team winning 1-0 and the ‘B’ losing 6-0. Women of the match were Georgia Howlett, Evie Henderson and Antonia Anderson. The 1st team’s first fixture was against Loughborough, who are normally reasonably strong. In a very enjoyable match, with both teams playing good hockey and demonstrating excellent sportsmanship, despite a good comeback in the second half, they lost 6-3. MOM was club Captain Tom Palmer, for his defensive role for the team.

The final game in September was the Old Boys’ game. Barry Middleton returned, along with many ex international and Doncaster 1st team players. In a highly entertaining match, the “young” 1st team held their own and created many chances. The Old Boys were still clinical in the goal, with Kirk Bellerby scoring a couple and an excellent team goal was finished off by Elmo. The 1st team created many chances in the 1st half through strong runs from George Fisher and Adam Bambrough, with Jack Stoves and Tayaab Rehman forcing the keeper into many saves. A little more to the side of the GK and there would have been goals.

The second half saw the 1st team apply more pressure and create more chances, restricting the Old Boys to less breakaway opportunities. However, the 1st Team GK wanted to get involved and decided to pick on Barry in a one on one situation. This resulted in a flick awarded to Barry, which James said if he had not got a wooden stick, would have been saved. The game finished 5-2 to the Old Boys. In the bar afterwards, many Old Boys were complimentary about the 1st team’s performance and Barry spent time talking to the boys and staff, kindly signing sticks and balls. We hope to see him later in the year.

Thank you also to Alan Stoves for Umpiring and the Old Boys for providing food, which the boys made the most of.(Sorry)

What a great way to start the school year! 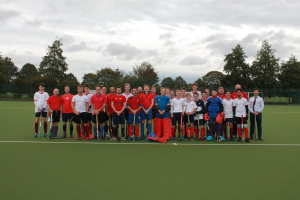 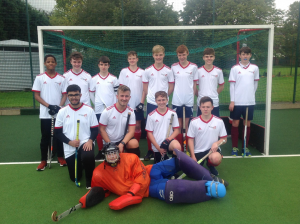 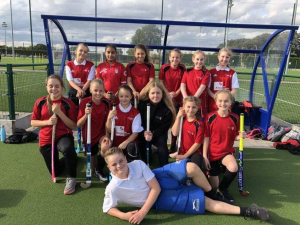 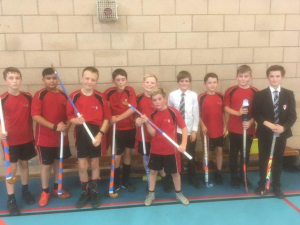