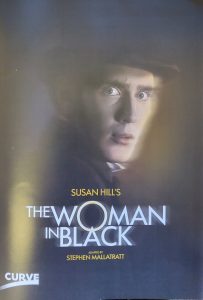 On Thursday 23rd January, ICA-Perform took 46 students to the beautiful Curve Theatre in Leicester to watch The Woman in Black, “Susan Hill’s acclaimed ghost story [which] comes dramatically alive in Stephen Mallatratt’s ingenious stage adaptation – “The most brilliantly effective spine-chiller you will ever encounter” (Daily Telegraph). Now celebrating three decades in the West End, Robin Herford’s gripping production is a brilliantly successful study in atmosphere, illusion and controlled horror. “One of British theatre’s biggest – and scariest – hits” (The Guardian).”

This was an excellent production which worked surprisingly well in a modern theatre and even though Mr Dougherty has seen it twelve times already, it still made him jump a little – probably more to do with the reactions of some of the students who were gripped by this thriller.

As always, Hall Cross was well represented and it was a pleasurable evening out which will ultimately support students in their written examinations for both the GCSE Drama and A Level Theatre courses.

We even had time for a little sightseeing.